Looking over the horizon at the future of recycling

Turning plastic waste back into oil – is this the future of recycling?

Introducing the infinite recycling system of the future: Pyrolysis.

Try not to be put off by the technical name. Pyrolysis is the term used when a material is heated without the use of oxygen. As no oxygen is used, the material does not burn. Instead, the chemical compounds which make up the material break down into oils and gases. When plastics are heated using pyrolysis they are, in simple terms, broken down into the oils from which they were created. 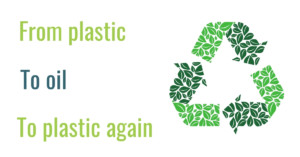 Plastic which is currently in circulation could be treated using pyrolysis, turned into oil, then re-moulded to create new or ‘virgin’ plastics and then, new products. The term pyrolysis is also known as ‘chemical recycling’. All types of plastics – including ones which are currently deemed unrecyclable – can be treated with pyrolysis. This type of plastic recycling is so useful due to the durability of plastics. Plastics can be chemically recycled an infinite number of times, without losing any of their durability benefits. So, the worst thing about plastics – the fact that they almost always lasts forever – becomes the best thing about plastics. The virgin material lasts indefinitely and can be re-moulded limitless times. To overcome the huge environmental concerns associated with plastic waste, we need to start valuing it as a resource rather than an inconvenient, non-biodegradable problem. With the adoption of chemical methods, this could become a reality and the future of recycling.

The way most plastic is currently recycled can be thought of as a ‘downward spiral’ rather than an ‘infinite loop’. Plastics are usually recycled mechanically – sorted, cleaned, shredded, melted and remoulded. Each time plastic is recycled this way – unless a small amount of unrecycled material is added to the mix – its quality is slightly degraded. Most plastics can be recycled a certain number of times before the polymer chains from which they are constructed break down and become unusable, but this is not the case with chemical recycling. Of course, given the quantity of unrecycled waste plastic already in circulation – as well as the excellent quality of the end-products it provides – mechanical recycling is likely to continue for many decades to come.

Another benefit of chemical recycling is the variety of by-products it yields. Plastics have a low heat conductivity, so the heat used in chemical recycling doesn’t affect the plastic evenly. Due to this non-uniform heat distribution different oils separate at different temperatures. This results in a wide range of by-products, including fuel and bio-oil, as well as the oils which will go on to create new plastic polymers. These various by-products can be used to supply a number of industries with sustainable fuels and oils.

Chemical recycling has been explored as a practical alternative to ‘conventional’ recycling for many years. So far, one of the biggest barriers to it becoming fully established has been the large amount of energy it uses. Despite it being a relatively easy process, it often uses a lot more energy than the end-product warrants. This, combined with the price of crude oil, often makes it cheaper to produce new plastic products than to recycle existing plastic – an obvious conundrum for manufacturers, for whom profit margin is a key consideration. As author Kim Stanley Robinson says “Money equals power; power makes the law; and law makes government.” Chemical recycling provides the potential for infinite recyclability, but the challenge remains to achieve it in a sustainable and economic way, and on a global scale. This article talks about the challenges of funding such big changes and here, a key author for the IPCC talks about how government investment is needed to ensure we can tackle climate change with enough force to make a difference. 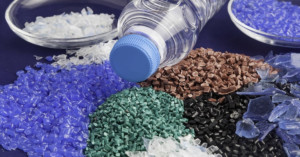 A number of ongoing research studies and new businesses are working toward a better understanding of pyrolysis technology. They aim to develop new, market-viable processes. There are also discussions about whether the chemical industry can (and should) have a role in supporting the plastics waste-management sector as it increases its operations on a global scale. Some say the next challenge for polymer chemistry – the industry responsible for the creation of plastics – is learning to ‘undo’ the process, by turning plastics back into oil via pyrolysis. In the paper industry, for example, where recycling has become integral to the production of new paper products, manufacturers played an important role. They were directly involved in investment which established recycling processes and often own the factories and facilities which make up the recycling infrastructure. The paper industry’s recycling rates continue to be above those of any other material, at around 80% in the UK. Of course, there is huge room for improvement; if every person in the UK recycled just 10% more paper, we would save approximately 5 million trees each year.

The UK leads the way in chemical recycling technology

There are currently a number of businesses across the world trialling chemical recycling techniques, with an eye on the future of recycling. UK-based Recycling Technologies has developed a machine that can treat hard-to-recycle plastic such as films, bags and laminated plastics, breaking them down into oil, which can be used to make new virgin-quality plastic. The first commercial-scale unit was installed in Perth in Scotland in 2020. BP has developed an enhanced recycling technology, BP Infinia, that enables currently unrecyclable polyethylene terephthalate (PET) plastic waste to be diverted from landfill or incineration and instead transformed into new, virgin-quality feedstocks. A feedstock is any renewable material that can be used directly as fuel or oil. Mura Technology, also in the UK, is constructing the world’s first commercial-scale plant able to recycle all kinds of plastic. Mura’s processing can handle mixed plastic, coloured plastic, plastic of all composites, at all stages of decay, and even plastics contaminated with food or other kinds of waste. Mura’s Teesside plant, due for completion in 2022, aims to process 80,000 tonnes of previously unrecyclable plastic waste every year, with sites planned in Germany and the US. By 2025, the company aims to provide one million tonnes of recycling capacity on a global scale. “Our recycling of waste creates 100% recycled plastics with no limit to the number of times the same material can be recycled. This removes the need for plastic production from fossil resources and enters plastic into a circular economy,” says a Mura spokesperson. Mura’s process aims to complement the existing mechanical processes and infrastructure, not compete with them, by recycling materials that would otherwise go to landfill, to an incineration plant or into the environment.

The future of chemical recycling 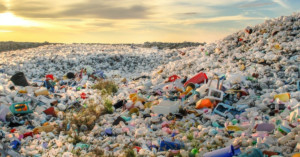 There are currently two main methods used to reuse plastics: mechanical recycling and chemical recycling. Mechanical recycling takes used plastic and physically processes it back to resin pellets, leaving the polymer chain intact. As we now know, chemical recycling puts used plastics through a chemical process that breaks them back down to their original state. However, finances remain an issue across the sector. Sara Wingstrand is the New Plastics Economy Project Manager at the Ellen MacArthur Foundation. Wingstrand says the only path to “dedicated, ongoing and sufficient funding at scale” for recycling is through mandatory, fee-based business schemes. These would see all industries that introduce plastic into the world taking responsibility for their products; contributing funding to collect and process their packaging after its use. “Without these schemes, it is very unlikely recycling of packaging will ever scale to the extent required,” says Wingstrand. Currently, just 16% of plastic waste is recycled to make new plastics, while 40% is sent to landfill, 25% to incineration, while 19% is dumped, often ending up in rivers and oceans. We’ve been in desperate need of an efficient, global waste management system for a long time. Now is the time to make the change happen. Chemical recycling could be the solution – and the UK could help to lead the way with research, policies and infrastructure. A Mura spokesperson adds “Chemical recycling is a new sector, but the scale at which it is developing shows both the urgent need for new technology to tackle the rising problem of plastic waste and environmental leakage, and an opportunity to recycle a valuable ready-resource, which is currently going to waste.”

The Role of British Recycled Plastic 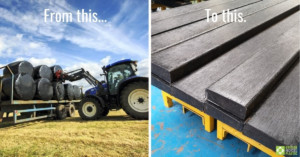 We have a keen interest in, and are keeping a close eye on, current, emerging and modern recycling methods here at British Recycled Plastic. These technologies, in many cases, are in their infancy; developments are fascinating and evolutionary. As we watch and learn, we continue to turn waste into raw materials. It is clear that all of us need to look for ways to keep recycling the existing plastic that is already in circulation, rather than the constant need to create new plastics from natural resources. British Recycled Plastic provide a range of ultra-tough products that keep plastic out of landfill and put to good use. One of our main objectives is to produce top-quality goods while strongly limiting the waste of raw materials. We’re proud of how our role in the world of recycling is helping to reduce landfill mass and create products that are both long lasting and beautiful. We’re committed to widening the market for recycled, environmentally friendly alternatives to traditional materials and we’re committed to the future of recycling.

Nadia Williams2021-08-24T11:59:09+00:00August 13th, 2021|Categories: Pollution, Recycled Products, Sustainability|Tags: plastic pollution, Sustainability|Comments Off on Looking over the horizon at the future of recycling

This website uses cookies to improve your experience while you navigate through the website. Out of these cookies, the cookies that are categorized as necessary are stored on your browser as they are essential for the working of basic functionalities of the website. We also use third-party cookies that help us analyze and understand how you use this website. These cookies will be stored in your browser only with your consent. You also have the option to opt-out of these cookies. But opting out of some of these cookies may have an effect on your browsing experience.
Necessary Always Enabled
Necessary cookies are absolutely essential for the website to function properly. This category only includes cookies that ensures basic functionalities and security features of the website. These cookies do not store any personal information.
Non-necessary
Any cookies that may not be particularly necessary for the website to function and is used specifically to collect user personal data via analytics, ads, other embedded contents are termed as non-necessary cookies. It is mandatory to procure user consent prior to running these cookies on your website.
SAVE & ACCEPT