On a recent visit to Spen Victoria Cricket and Bowling Club near Bradford to see how our Heptonstall benches were doing we snapped this photo of a bench carefully restored and updated by Andy Robinson in 2017 in memory of his father Ken Robinson. Aside from a few leaves, the bench looks as good as the day it was restored. The bench comprises of a steel powdered coated frame and is finished with recycled plastic lumber. The original bench, made by Ken using steel and timber which he carefully maintained year after year until his death.

On return to HQ, curious about the bench’s origins we did a bit of digging around and found that Andy, now an engineer in Leeds, had bought the lumber from us in 2017.

Andy started playing at the cricket club as a child of eleven after which the cricket club became an important part of the family’s social life. His mother Brenda soon started helping out at the club closely followed by his father Ken. What started as occasional help became a lifelong commitment to the day to day running of the club, serving refreshments and carrying out work in the grounds. A commitment which for Brenda has continued long after her son’s involvement in the club. It’s soon apparent to anyone who spends time there that more than a bowling or cricket club, Spen Victoria is a calm oasis of hospitality which has served as a hub of genuine camaraderie for generations of families. 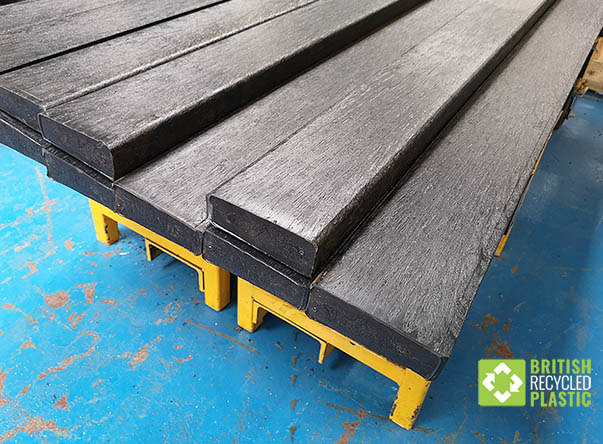 The benefits of recycled plastic lumber.

We still sell the lumber which Andy used, along with many other profiles which you can find here. Andy wanted to use long lasting materials which wouldn’t require any maintenance and he chose wisely. The lumber is rot proof, wipe clean and doesn’t retain moisture – so there’s no waiting for the benches to dry before matches. The lumber can be cut to length and comes in brown and black.

If you’d like to know more about how you can reduce your consumption of new materials, re-use equipment and recycle items no longer useful to you, have a look at this website here: http://www.recycling-guide.org.uk

Any cookies that may not be particularly necessary for the website to function and is used specifically to collect user personal data via analytics, ads, other embedded contents are termed as non-necessary cookies. It is mandatory to procure user consent prior to running these cookies on your website.